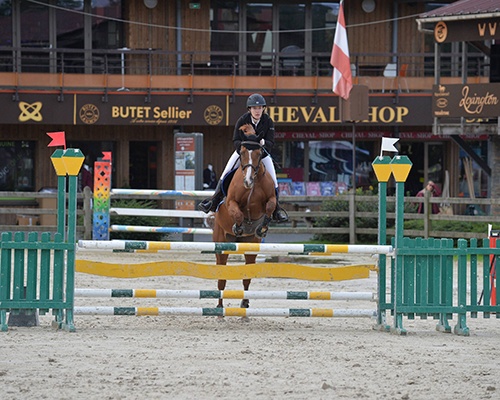 Won by the nine-year-old unraced mare SELIMAR MONTERG (Marshall) and her rider Violaine Dutilloy, the competition brought together 13 competitors including KYALCO (Falco), the winner of the Prix Violon II (Listed) in 2016 for Philippe Peltier and Sadler’sflaure (Ballingary), Listed and Group placed for Christophe Aubert at Auteuil and later Donatien de Beauregard.

A small anecdote - Sadler’sflaure, now owned by Tamara de Beauregard, was ridden by Marius Cypres, the son of Thierry Cypres and the breeder of several top jumpers including one of the favourites for this autumn’s Prix de La Haye Jousselin, BIPOLAIRE (Fragant Mix).

Just a few minutes later, it was the trainer Pauline Prod’Homme that steered VICTORY DE REBECQ (Any Given Saturday) around the course, having also trained and ridden him during his racing career. While the pair occurred four faults at the final fence, Pauline Prod’Homme said, "VICTORY DE REBECQ was "my" horse. I rode him each morning when he was in training and also in all of his races. Together with my father, we think the retraining of racehorses is very important. We all replace our horses, and it’s very nice, and sometimes very surprising to see what they are capable of in their new careers. Days like today need to continue to be supported in the future because it’s important that these horses are looked after when they finish their racing carers. Today, I did the Show Jumping with VICTORY, but I know he is also trained in Western riding thanks to Deborah Leroy. It’s fantastic!"

Au-Dela Des Pistes would like to thank all its partners: Al Shaqab Racing, French Breeders’ Association, Horse Master, TRM, and the Aga Khan Studs, that have enabled us to organise these seven events in 2019.