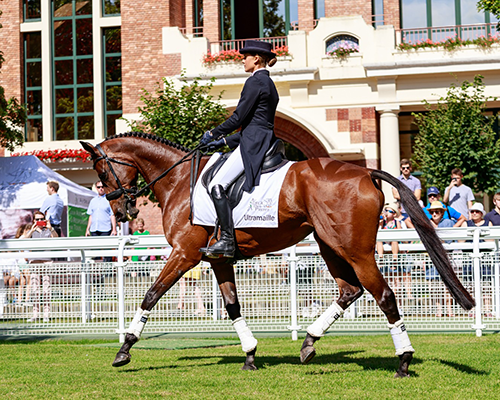 The fourth edition of the charity Au-Dela Des Pistes’ Retrained Racehorse Day took place on Saturday 24th August at Deauville racecourse. Sponsored by Al Shaqab Racing and the Association Française des Courtiers, this day was organised by in partnership with France Galop.

A Parade of Champions opened the festivities, with lots of memories resurfacing from the brilliant ex-racehorses on show. Fans came in large numbers to admire their former champions such as AFRICAN STORY and PRINCE BISHOP, winners of the Dubai World Cup in 2014 and 2015 for the Godolphin colours, KASBAH BLISS, the winner of the Qatar Prix du Cadran in 2011 as well as many other Groups both on the flat and over jumps, MARCHAND D'OR, the "King of Deauville" for trainer Freddy Head after winning the LARC Prix Maurice de Gheest in 2006-2007-2008, CIRRUS DES AIGLES, that needs no introduction, as well as the recently retired 2016 LARC Prix Maurice de Gheest winner SIGNS OF BLESSING that was greeted by his trainer François Rohaut and jockey Stephane Pasquier in the parade ring. He was retired in July 2019 and is now with the DH Team. Jockey Maxime Guyon was also keen to see his old friend multiple Group 1 winner SOLOW, for whom he rode to many a success for the Wertheimer Brothers.

Following on from the parade, various Dressage and Show Jumping demonstrations were given by international Event rider Clara Loiseau and her mare ULTRAMAILLE, as well as from the Horse-Ball team of Haras de Boscherville directed by Gildas Mabilais in Normandy.Three visits by the public to the ex-racehorses were conducted by the Au-Dela des Pistes team, during which no fewer than 80 novices and experienced riders went to meet these horses and learn about their achievements.

Aliette Forien, President of the association Au-Delà Des Pistes, said: "This fourth edition has upheld all its promises. We had excellent demonstrations that have once again shown the infinite potential of retraining racehorses for all types of disciplines. It is also interesting to see, through the public visits to the boxes that we organised, that many people, neophytes or not, were pleasantly surprised to see the future of these horses, whether they excelled on the racetracks or not. They are happy to understand that something is being put in place, or at least possible, for racehorses arriving at the end of their careers. Some of them have started coming to the races following the first Retrained Racehorse Day that we organised 3 years ago. This is very encouraging for our industry. We warmly thank all those involved who once again contributed to the success of this event."