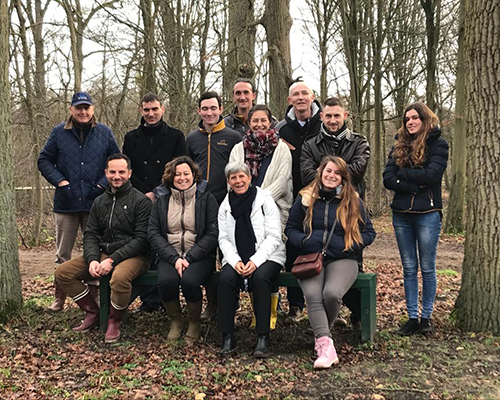 The 2019 General Assembly of the charity Au-Delà Des Pistes, which works for the promotion and retraining of thoroughbred horses in France, was held on Friday 17th of January in the Salon Katko at Chantilly training centre.

Representatives of 14 of the 24 retraining establishments referenced by the charity were present from across France:

Following a visit to Fabrice Chappet’s stable and watching morning training on the Lions training track, a first for some, the representatives were able to enter into long discussions with trainers, breeders, agents, vets and other racing professionals, as well as Dr. Paul-Marie Gadot of France Galop, with whom ADDP signed a partnership agreement with in April 2019.

The retraining establishments pointed out several difficulties encountered in the exercise of their activity, and appealed to representatives of the equestrian sector to help them find solutions.

- The management of horses retired through injury was first mentioned. Even if many injuries can be treated and, in the long term, have no contraindications for leisure riding or even competition in show jumping, eventing, horse ball or polo, the reception of these horses has proven to be very expensive for the structures because veterinary expenses are an additional factor that need to be taken into consideration prior to the retraining work. Within the framework of the agreement that was signed between Au-Delà Des Pistes and France Galop, the referenced structures that welcome horses requiring at least two months of convalescence receive a flat-rate aid of €300. This amount is often much less than the costs actually incurred.

- The request of the retraining structures was heard, and Dr. Gadot expressed that France Galop was working on solutions to supplement the financial aid provided by the institution.

- The financial contribution of the transferring owners was also discussed. At present, they bear the cost of transporting their injured horses to the retraining facilities. While the principle is generally well accepted by the owners, the event of this financial solicitation with the disappointment linked to the end of the horse's career proves to be particularly unfavourable. Improvements will be looked in to so that this expense can be anticipated by owners, in the form of "retirement savings", for example.

- The issues of transparency regarding the actual state of health of retired racehorses also fuelled the debate. Several retraining structures have reported "unpleasant surprises" at the arrival of a retired racehorse resulting in longer than announced convalescence times, or even horses placed without any veterinary record to inform the exact extent of the injury and the treatment protocol.

- Consequently, Au-Delà des Pistes will proceed in two directions for 2020:

o To implement major educational actions to raise awareness among owners and trainers of the benefits of transparency when retraining an injured horse;

o Work on a system to help establish a complete veterinary file at the time of placement.

- The marketing of horses after their retraining was also addressed. Au-Delà Des Pistes already organises show jumping and eventing competitions reserved for retrained racehorses, the aim of which is to highlight their versatility and thus encourage demand from amateur riders for this particularly affordable horse profile, but which too often carries a bad reputation. These initiatives will be multiplied in 2020 with the creation of dressage events, the addition of new venues for the events and the involvement of several retraining structures in their organisation. Au-Delà Des Pistes is also working on the creation of a digital platform that will relay the sales announcements published by the structures in order to increase their reach.

Carole Desmetz takes over from Marine Thevenet for Communication and Events

The General Assembly also announced that Carole Desmetz would take over the role of Communication and Events for the charity from Marine Thevenet, who has been within the organisation since it started in August 2016. Also active in the Association des Jockeys and the Jumping de Chantilly, Carole Desmetz has the ideal profile to solidify the link between racing and equestrian sports.

She can be contacted at: carole.desmetz@audeladespistes.fr