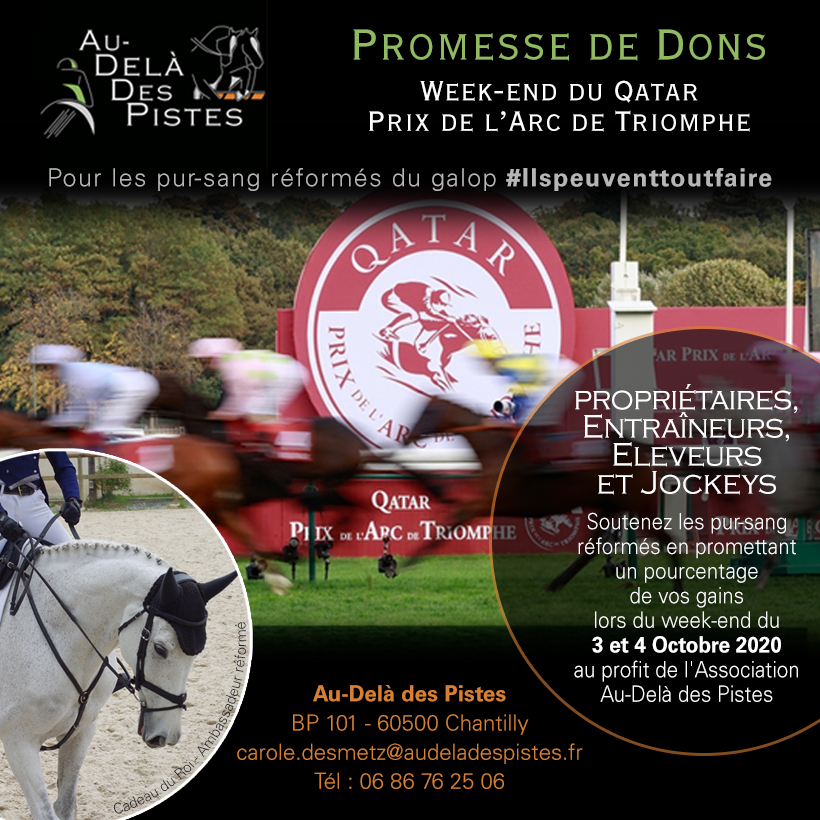 As part of its partnership with France Galop, Au-delà des Pistes will be at the fore during the Qatar Prix de l'Arc de Triomphe weekend, the world’s best race.

France Galop will support Au-delà des Pistes in two ways during the meeting:• Raise funds in response to the increase in requests for placements of retrained racehorses, compensating for the cancellation, due to the health crisis, of events that are usually used as fund-raisers.• Runner connections “The Arc promise”:Owners, trainers, breeders and jockeys, associated with one or more runners during the Qatar Prix de l’Arc de Triomphe weekend can donate a percentage of their earnings. There is no obligation for the connections, however the decision will be taken beforehand by them and only applies in case of winnings. Following the model of the Breeders’ Cup Pledge, which has been a great success in the United States, this operation allows the most successful horses on the racetrack to support their counterparts, especially those whose careers have been prematurely interrupted by injury.At national as well as international level, the image that the whole industry is committed to the retraining and well-being of the most vulnerable horses is a strong message showing the importance given to thoroughbreds, their sporting career and their retraining. The pledge form is available from Carole Desmetz, Head of Communications and Partnerships for Au-delà Des Pistes: carole.desmetz@audeladespistes.fr - 06.86.76.25.06