Thoroughbreds for a second career in Horseball 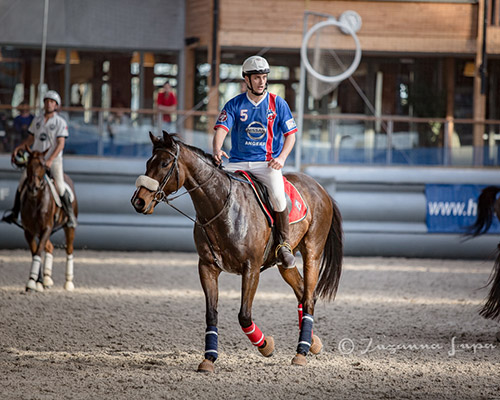 Demand grows for retired racehorses as they make a successful transition to competing in this popular sport. 140 retrained racehorses participated in the ninth and tenth stages of the French Horseball Championships at Deauville this weekend.

Saturday 11 March saw Deauville’s Pole International du Cheval host two stages of the French Horseball Championships, and Au-Delà des Pistes was thrilled to be the event’s partner and sponsor.  President Aliette Forien was on hand to present the winning teams with prizes of Au-Delà des Pistes embroidered saddle-cloths.
140 retrained racehorses took part in the two-day competition, a number which signifies the clear majority of the competing equines: only three were not thoroughbreds!
Horseball is rapidly becoming recognised as a significant second career for racehorses as demand grows from within the sport for thoroughbreds: it is a discipline suited to a broad spectrum of equestrian athletes, but the most-sought after qualities are those inherent in the thoroughbred: speed and intelligence.
Pro-Elite player, Gildas Mabilais, who plays for Coutainville and runs the Haras de Boscherville, a commercial stud specialising in Horseball training, explained:
"The thoroughbred is undoubtedly the breed best suited to Horseball, being endowed with excellent reflexes and athleticism, and they love group sports.  Only horses over the age of five can compete but otherwise there isn’t an ideal model.  Horses can range in size between 15.3 HH to 17.0 HH or more, depending on the size of the rider! Mostly we are looking for compact, close-coupled types, because Horseball does require the horse to have strength behind.  In general, they learn very quickly and after only two months of retraining an ex-racehorse can be competing at amateur level."
Notable performers formerly owned by the Marquise de Moratalla and the Niarchos Family
Several of the horses competing in the Championships would be recognised by racegoers for their former exploits, including ICE STONE, a three-time winner for his owner-breeder the Marquise de Moratalla while trained by Didier Guillemin. He now competes at Pro-Elite level for Angers, with his rider Pierre-Hugues Henry who is stud manager at ACF Equine.
Previously trained by Pascal Bary for the Niarchos Family, ZHIYI won the Listed Prix de Saint-Patrick and ran 3rd in the G2 Prix Guillaume d’Ornano et G3 Prix du Prince d’Orange in 2013.  He now represents Coutainville.
Images from the day can be seen on Au-Delà des Pistes Facebook page.