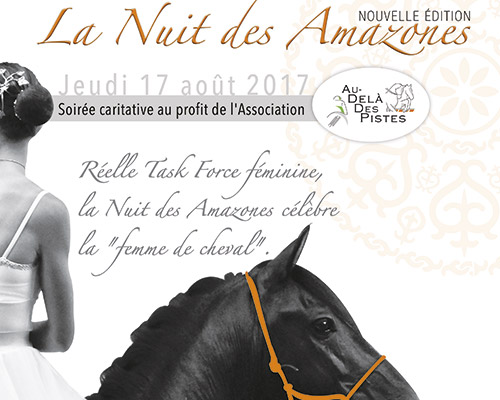 Au Delà Des Pistes is pleased to announce their partnership with the traditional Nuit Des Amazones charity event, which takes place on Thursday 17th August at the Polo Club de Deauville, situated in the centre of Deauville racecourse.

This means any profits raised during the evening will be given to Au-Delà Des Pistes.
The duo, Delphine Garcia-Dubois and Anne-Sophie Yoh-Benet, started the event in 2011 with an aim to bring both racing and equestrian worlds together.
This event also aims to create a veritable female Task Force amongst women in racing and equestrian sports. Since its creation six years ago, the evening has become a feature of the August Deauville calendar.
Aliette Forien, the association’s President, stated: « Au-Delà Des Pistes is a new project for racing professionals that aims to encourage the retraining of racehorses, once their race careers are over which is often only a small chapter in the life of a racehorse. This is a collaborative project that unites trainers, owners, breeders, jockeys, work riders and equestrians with a common passion; the love of the horse. Thoroughbreds are often victims of preconceived ideas about their breed. By supporting structures that undertaken retraining; by promoting the versatility of ex-racehorses and by creating links between the racing and equestrian worlds, we hope to build the demand for thoroughbreds once their race careers are over. We sincerely thank La Nuit Des Amazones for choosing Au Delà Des Pistes to be their feature charity for the 2017 edition. For the last six years, this charity event has benefited several renowned associations and we are honoured that our charity has been selected this year.”
Tarif
€75 per person
For further information on La Nuit Des Amazones
https://www.facebook.com/LaNuitDesAmazones/
www.lanuitdesamazones.com