Raceday dedicated to the retraining of racehorses to be held at Chantilly racecourse on Sunday, 9 July 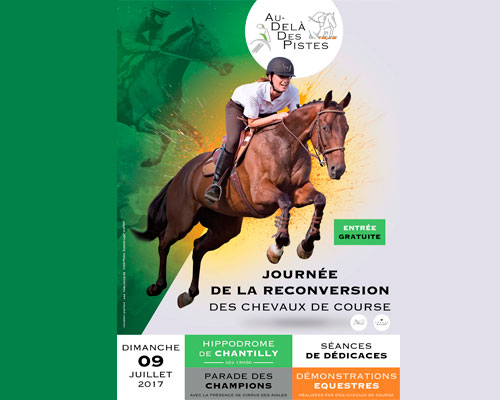 Au-Delà des Pistes, in partnership with France Galop and Chantilly racecourse, is delighted to announce their second Retrained Racehorse Day, to be held on 9 July. Chantilly racecourse will host the event and they have generously offered free entry to all racegoers for the day.

Alongside an excellent programme of racing, which includes the G1 Prix Jean Prat and a feature handicap, ex-racehorses will perform a variety of equestrian disciplines in front of the stands on the racetrack.  Furthermore all non-Group races on the programme will be renamed in honour of the retraining of racehorses.
Racegoers will have the opportunity to witness demonstrations of polo, show-jumping and dressage. SLEEPING FRANÇOIS, ridden by his owner Solène Hudbert, will perform a demonstration of show-jumping.  From the family of dual Grand Steeple-Chase de Paris-winner Milord Thomas, Sleeping Francois didn’t show the same talent as his close relative on the track, having been unplaced in three starts when trained by Dominique Bressou. However he has been successfully retrained and regularly wins prizes in the Amateur 1 category on the show-jumping circuit.
He will be accompanied for the 9 July demonstration by FORTEZZO.  Formerly trained by Pia Brandt before moving to Jean-Paul Gallorini, Fortezzo scored five times in minor company on the flat, for leading owner Gérard Augustin-Normand.  Now under the care of Sophie Perouelle, well-known in Chantilly in her role as Head of Professional Relations at the AFASEC (the French racing school for jockeys and stable-staff), the pair have just been crowned Regional Champions in the Amateur 2 category.
Polo ponies from the locally based Chantilly Polo Club (one of the largest clubs in Europe, and host to European and World Championships) will also be performing in front of the crowds.  While these equine athletes failed to shine on the racecourse, they have all been successfully retrained to compete at the highest level on the polo field and, with their riders, will demonstrate some of the skills they have acquired.
One of the more original displays of the adaptability of the thoroughbred will be the demonstration of classical dressage by Yves Bienaimé and his horse ALMIYR.  Yves Bienaimé is a celebrated figure in Chantilly, as founder of the Museum of the Horse in the historical Grands Ecuries, where Almiyr now lives, and he is renowned for his skill at this discipline.  Almyir, formerly under the care of Alain de Royer-Dupre for his owner-breeder, HH The Aga-Khan, is a handsome grey whose physical attributes have allowed him to be retrained by a master into a novel discipline for an ex-racehorse. Spectators will be treated to a display of elegance and harmony.
The programme will also feature a Parade of Champions, headed by the ever-popular CIRRUS DES AIGLES.  Retired from racing in the spring of 2016 after a long and glorious career, which included seven Group 1 races, Cirrus des Aigles splits his time between the stables of his former trainer, Corinne Barande Barbe, and his former jockey Christophe Soumillon.  Alain de Royer-Dupré, one of the most celebrated figures of the French flat will parade his faithful hack, HILLBILLY, a useful performer over jumps who was bred by none other than Champion NH trainer, Guillaume Macaire.  While under the care of the Royan-based Macaire, racing in the famous colours of Magalen Bryant, he won eight of his 41 races.  Now he keeps a watchful eye over the Royer-Dupré string, which includes many of HH The Aga Khan’s Chantilly-based racehorses.
Au-Delà des Pistes organises Retrained Racehorse Days as a means to raise awareness among racing fans and professionals alike of the adaptability of thoroughbreds to be retrained into second careers.
Au-Delà des Pistes will also have an information stand for racegoers to visit to learn more about the charity and to meet the team.