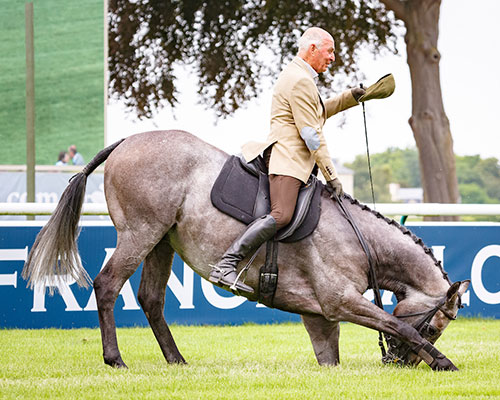 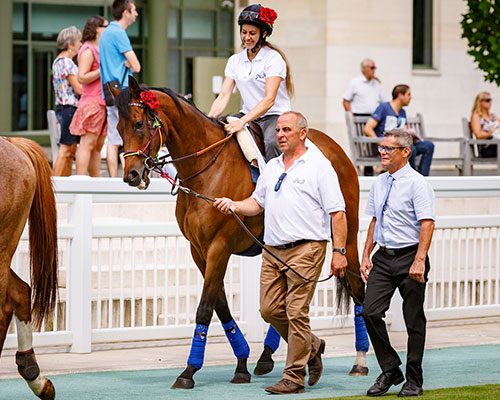 The feedback from the public and professionals alike, as well as a significant number of new sign-ups to the cause, confirmed the success of the day. Au-Delà des Pistes were facilitated in the organisation of the day by France Galop and Chantilly racecourse.
As always, fan favourite Cirrus des Aigles proved to be a huge draw. Corinne Barande Barbe’s now-ten-year-old showed he still retains his joie-de-vivre as he was applauded throughout the Champions’ Parade, ridden by his faithful rider Zoe Gargoulaud. The Cirrus-Selfie initiative, whereby fans could come and have their photo taken with him, showed just how popular the seven-time Group 1 winner remains. Also parading were Saratan and Pearl Flute who, despite winning at Group level, never quite matched the feats of Cirrus des Aigles on the racecourse.  Nevertheless they are notable for having launched the careers of their trainers, Mikel Delzangles and Francis-Henri Graffard, and are now much-loved stable hacks (and family pets) for their former conditioners. Like Cirrus, they are great examples of how trainers form real bonds and attachments to the horses that they spend so much time with.
They were joined in the parade by Fortezzo, a five-time winner on the flat under the care of Pia Brandt and Isabelle Gallorini. The eye-catching chesnut is the current Regional Champion in show-jumping for his rider Sophie Perouelle. The former HH The Aga Khan-owned Shalyian completed the line-up. Despite never making it to the racecourse he is now excelling on the polo fields at the Chantilly Polo Club.
The second demonstration took place on the track in front of the stands with two horses showing their skills over show-jumps, including Fortezzo. He was joined by Sleeping François, ridden by Solène Hudbert.  This former National Hunt performer is a close-relative to Grand Steeple-winner Milord Thomas and was retired from racing three years ago, following injury. He and his rider now make an accomplished eventing partnership. Sophie Perouelle, Fortezzo’s rider told us "Racehorses are very capable of being retrained into another discipline. The key is to listen to them, as they are very sensitive animals who like to be taken care of. It is important for people to understand that.  Fortezzo was very straightforward to retrain, even though he’d had a prolific career on the racetrack, running twenty times."
Yves Bienaimé holds a special place in local lore as founder of Chantilly’s Living Museum of the Horse, and having been the youngest Ecuyer Instructor in France. Racegoers were treated to a demonstration of classical dressage performed by Yves and his five-year-old horse Almiyr. This display of agility and the harmonious relationship between horse and rider, to the backdrop of the famous Grandes Ecuries, left spectators awed. The unraced Almiyr, a son of Dubawi, never raced for his former owner HH The Aga Khan, but having suffered a tendon injury two years ago he has now found a new career in a vastly different arena.
The final demonstration of the day, with black thunder clouds rolling in (and the rain holding off just long enough) was performed by four retired racehorses from the Chantilly Polo Club, who had been brought along by Benoit Perrier, the club’s manager and avowed thoroughbred enthusiast.
One of the Charity’s ambassadors had a busier day than most, as despite winning three races, including the feature G1 Prix Jean Prat, Christophe Soumillon took time out of his hectic schedule to come to the Au-Delà des Pistes stand to sign autographs, to the immense pleasure of his fans in attendance.
The Au-Delà des Pistes team would like to extend thanks and gratitude to the wonderful team of enthusiastic volunteers and participants who all contributed to make the day a success. They ranged in age from five to 81 years-old, and were made up of horse-lovers from across the spectrum, including many Chantilly-based professionals who were all brought together by their belief in the capabilities of the thoroughbred.