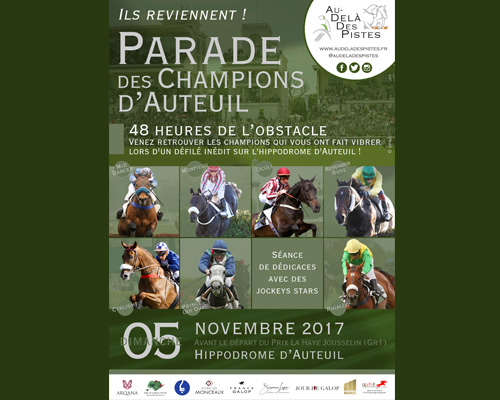 During the « 48 heures de l’obstacle » race meeting that takes place at Auteuil racecourse on Saturday 4th and Sunday 5th November, Au-Delà Des Pistes are due to organise an inaugural Parade of Champions. This event, that will take place just prior to the running of the Prix La Haye Jousselin, will gather a number of previous Auteuil heros, bringing them back to the track that made them famous.

The public will have the chance to admire the following champions:

- Arnaud Chaillé-Chaillé’s unforgettable Cyrlight, he placed and won 29 times from 31 starts. Bred by Patrick Boiteau, the big chestnut was unbeaten in his first 11 races including the Grade 1 Prix Ferdinand Dufaure and the Grade 1 Maurice Gillois in 2004. Despite several interruptions to his race career, Cyrlight continued to perform at the highest level over both the hurdles and steeplechases until the age of 10.

- His stable mate and champion chaser Mid Dancer, a four time Grade 1 winner including 3 wins in the Gras Savoye Grand Steeple Chase de Paris in 2007, 2011 and 2012. This small horse with an enormous heart and a huge “jump” triumphed in no less than 25 races. He won the hearts of Auteuil racegoers over 10 consecutive seasons.

- Another multiple winner of the Gras Savoye Grand Steeple Chase de Paris in 2007 and 2009, as well as the Prix La Haye Jousselin in 2008, Remember Rose. He will be presented by the Haras de Saint Roch, hosted by Denis Bourez, with whom Remember Rose continues his retirement since the end of his horse racing career.

- One of Jacques Détré’s favourite horses, Oculi, winner of both the Grade 1 Prix Ferdinand Dufaure and the Grade 1 Maurice Gillois in 2008. Amateur rider, Valentine Neuvial, with whom he has discovered the world of equestrian competitions, will ride the handsome dark bay.

- Another champion to have carried the Détré silks, Monpilou, the best anglo-Arab of his generation. He was even able to beat thoroughbreds on a number of occasions over the Auteuil jumps.

- Prince Oui Oui the ex-champion of the Papot family and winner of the Grade 1 Prix Cambacérès in 2009.

- And finally the Auteuil gladiator and representative of Pierre Coveliers, Rhialco, the multiple Grade 2 and 3 winner. He achieved the remarkable feat of returning to the top level over the jumps after fracturing his forehead. He retired from racing in 2016 at the age of 11 after being beaten a nose in a Listed race on his last start. This performance summed up his amazing will to win.

These incredible retired champions range from 10 to 17 years old; they have won a total of 94 races between them, whilst amassing 10 million euros of prizemoney in France. Through their talent, their courage and their longevity, they have enthused racegoers with their exploits and their return to the most famous jumps racecourse in France, will be a fitting tribute to their illustrious careers.

Created in 2016, the Au-Delà des Pistes charity works to promote the retraining of racehorses and assists injured horses to benefit from a happy retirement, like those enjoyed by Mid Dancer, Cyrlight, Oculi and the other champions that are due to parade on Sunday 5th November.