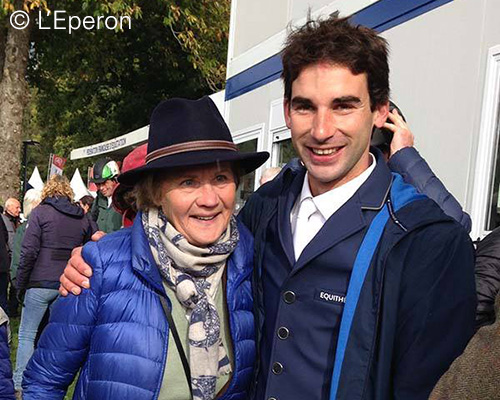 Horse breeder and manager of the well-known Haras de Montaigu, Aliette Forien, President of the  French Charity, Au-Delà des Pistes for the promotion of the retraining of racehorses, claimed the seven-year-old World Championship this last Sunday at Le Lion in Angers, as the owner of Alertamalib'Or.

The French Olympic Champion Astier Nicolas, ambassador of the Au-Delà des Pistes charity himself, was aboard Alertamalib’or to win the seven-year-old class. Passionate about horseracing, he is in partnership with Aliette Forien on this horse since the beginning of 2017.
Former distinguished show jumping rider, Aliette Forien explained: “We met several months ago with Astier  and back then, I shared my wish of acquiring an eventing horse with him. Shortly after that, Astier came back to me suggesting Alertamalib’or. My daughter Sybille and I let ourselves tempted about his offer and we acquired half of the horse. Thereafter, Alertamalib’or claimed the seven-year-old French Championship title in Pompadour. Today, he added the World Championship title to his record – a great pleasure for us.  We entered Thoroughbred yearlings for the Octobre Sale in Deauville and we only arrived Saturday for the Cross-Country test. We spent two amazing days at Le Lion, with a clear cross-country round for Astier and Alertamalib’or and this final phase, breathtaking, Show-Jumping round. The atmosphere reached its highest because they were only one point behind. Being part of it might actually be more intense emotionally than racing ! We have won great titles this year, such as the Derby d’Epson for exemple, and this one is incredible. The eventing world is very convivial and welcoming and everyone takes any chances available to support and congratulate each other. I strongly encourage any horse lover to try this sport because eventing is clearly a special one.”