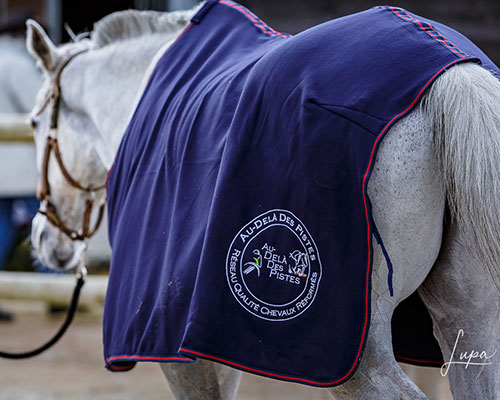 On Saturday 10th March, for the second consecutive year, Au-Delà des Pistes were partners at the Deauville stage of the French Horse Ball Championships organised at the Pole International du Cheval. The winning teams each received an ADDP embroidered horse blanket, while the ADDP team was on hand to meet all the professionals.

130 ex-racehorses participated in the various matches, which was the vast majority of the horses taking part, with only 2 non-thoroughbred participants. The Horse Ball discipline constitutes a major outlet for ex-racehorses and a variety of different physical types can adapt easily to this sport. Pro-Elite player, Gildas Mabilais, who plays for Coutainville and runs the Haras de Boscherville, a commercial stud specialising in Horseball training, explained: "The thoroughbred is undoubtedly the breed best suited to Horseball, being endowed with excellent reflexes and athleticism, and they love group sports. Only horses over the age of five can compete but otherwise there isn’t an ideal model. Horses can range in size between 15.3 HH to 17.0 HH or more, depending on the size of the rider! Mostly we are looking for compact, close-coupled types, because Horseball does require the horse to have strength behind. In general, they learn very quickly and after only two months of retraining an ex-racehorse can be competing at amateur level. We are permanently on the look out for new horses to retrain and it can prove difficult to find new recruits.”

Several well-known horses were participating in the French Championship, namely ROLLEX BOURGET, the representative of Joël D’Ersu. This gelding won the Listed Prix de l’Avre in 2012 when trained by Jehan Bertran de Balanda and in his new career, he plays for the Pro Elite Paris Mash team.

Whilst ALPIDIVO ran 63 times during his race career and he accumulated €89,000 in race winnings before reconverting to Horse Ball. He is now a top performer in his new sport and since he left the training tracks under the care of Mathieu Boutin, he has be named the Best Horse in 2011, 2013 and 2015 Horse Ball seasons for the National Belgium Team and he has won a Europe and World Championship title.

The photos of this event can be viewed on the Au Delà Des Pistes Facebook Page.