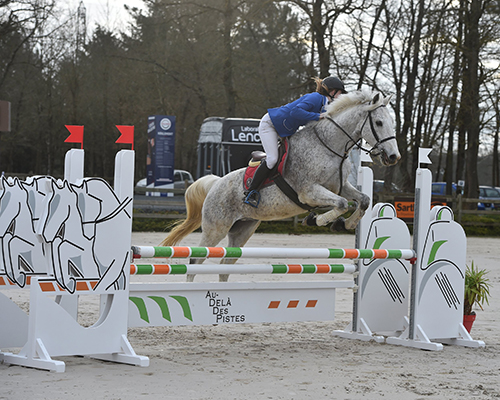 The second leg of the Au-Delà Des Pistes Trophy took place on Sunday 1st April at the prestigious Boulerie Jump site at Le Mans. This stage was sponsored by the Chantilly based trainer, Nicolas Clement, who provided the prize money for the competition, to show his support for the retraining of racehorses.

Mindbend, a 15 year old gelding by Verglas won the stage ahead of 13 other competitors. He had finished seventh in the initial stage of the Trophy on 17th March.

Mindbend was trained by Yannick Fouin during his race career and he ran from 2 to 10 years of age, gaining 10 wins, 18 places and €300,000 of prize money. Bred by Petra Bloodstock Agency and bought at the Arqana breeding stock sale for €32,000, Mindbend won on his debut as a two-year-old in June 2005 over 900m! He also won three Quinté handicaps at the age of five, six and seven.

Mindbend is the perfect example of a retrained racehorse, showing how a thoroughbred can be both precocious whilst also having a long career and even a second career as a show jumper! He also proves that a thoroughbred, that has run many times during his race career, does not necessarily need to rest in a field after retiring from racing and he can continue to compete in other disciplines.

The next stage of the Au-Delà des Pistes trophy, reserved exclusively to ex-racehorses from the flat and the jumps, is due to take place at the same site, in the Sarthe region of France, on Tuesday 1st May.