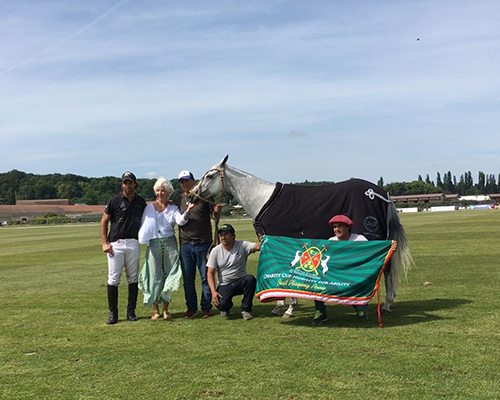 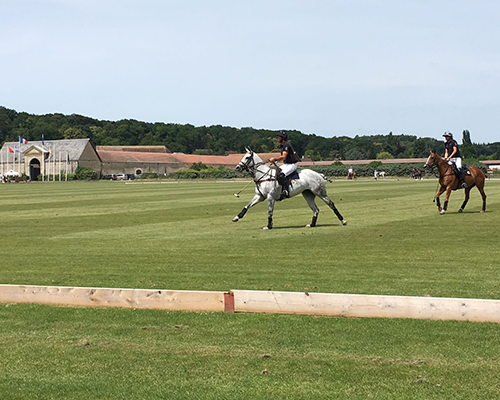 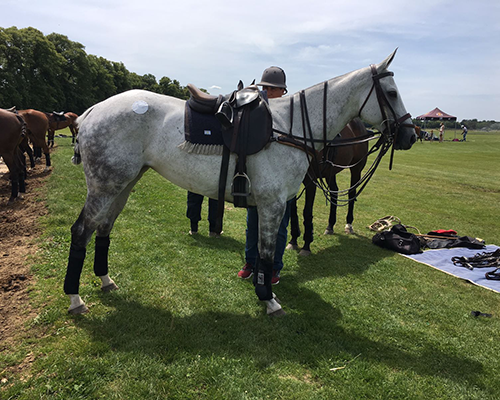 On Sunday, June 24th, thanks to the support of Laurent Benoît, founder of the bloodstock agency Broadhusrt Agency, Au-Delà Des Pistes had the pleasure of being the partner of the Charity Cup, international competition of Polo, held at the Polo Club du Domaine de Chantiily.

And it is CHARRUA , former 9-year-old race mare who has been nominated by the assembly presents "Best Ex-Racehorse" of the tournament. She was ridden by Valentine Novillo Astrada, Argentine player, member of the winning team of the Charity Cup, Los Nocheros.Born in Argentina at Haras don Florentino, a racing stables, Charrua has never raced and was very early retrained towards polo.At the end of the competition, Elizabeth Doumen, member of the steering committee of Au-Delà Des Pistes and representative of the Cell-Well-being of France Galop, offered to CHARRUA an embroidered blanket with the colors of the French Charity.

Elizabeth Doumen said: "Today we had the pleasure of rewarding CHARRUA as" Best Ex-Racehorse of the Tournament ». Like many, CHARRUA was retrained relatively young, but today's performance demonstrates the bravery, intelligence and many other qualities that Thoroughbreds show. She undeniably has a nice polo career that looks to her. This is a concrete example of the vocations of Au-Delà Des Pistes. We advise and guide the racing industry to find suitable solutions for theirs horses in different disciplines which they turn out to be very good elements. "

This day was an opportunity to show once again the versatility of the Thoroughbreds !

Au-Delà Des Pistes and Broadhurst Agency will have the pleasure of being associated once again with the next PGH Cup, on July 1st, at the Polo Club of Chantilly, where another retrained racehorse will be rewarded for his performances.