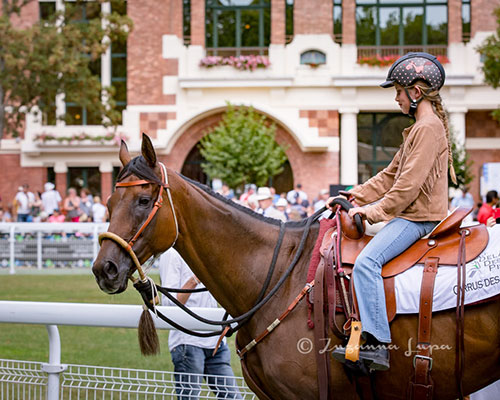 Between the eight races on the card, spectators were treated to demonstrations of ex-racehorses now performing at amateur or professional level in such diverse disciplines as dressage, show jumping, eventing, polo or horse ball. Gr.1 Prix du Cadran hero KASBAH BLISS, who has been turned into a successful dressage performer, was among the highlights.
Emotion was at its peak during the Champions Parade, which allowed industry professionals and racegoers alike to catch up with a particularly select group of former elite racehorses : between them, African Story, Remember Rose, Papineau, Cirrus des Aigles, Prince Bishop, Kasbah Bliss, Saratan and Pearl Flute won 48 Group races including 17 Group 1s for cumulated prizemoney of €22,929,976! Globe trotter CIRRUS DES AIGLES, the winner of 7 Group 1 races and the most recently pensioned of the lot, proved particularly popular under the western saddle of Charlie Soumillon, daughter of multiple Champion jockey Christophe who now cares for the former charge of Corine Barande-Barbe. Rider and horse have the same age, ten years and a half, and looked equally relaxed and happy walking around the parade ring.
In addition to the traditional pony ride available on the racecourse, young and older novice riders had the rare chance to get the leg up on a retired thoroughbred. Au-Delà Des Pistes ambassador Christophe Soumillon also signed autographs to his many fans on the association’s stand.
The response from the public was extremely positive, and Aliette Forien, owner of Haras de la Reboursière and President of Au-Delà des Pistes, stated at the end of a day packed with passion and emotion: "Whether we breed, race, sell, train or ride racehorses, we must worry about what happens to them at the end of their career on the track. Today’s event was a fascinating illustration of the countless ways in which thoroughbreds can continue to perform and be part of people’s lives once their racing days are over or if they prove not suited for racing. Our thanks go to France Galop and all the donators and volunteers who made this event possible. This is the best possible launch for Au-Delà Des Pistes and we look forward to hosting many events of the same kind in the near future."