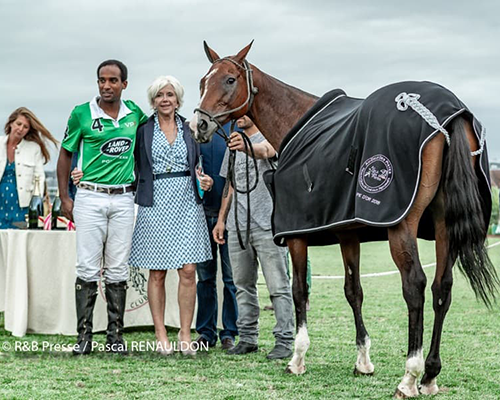 SUE BREEZE, ridden by Pierre-Henri NGoumou, was voted "Best Ex-Racehorse" of the Golden Cup, a prestigious international polo tournament. This bay mare by PHANTOM BREEZE and SIERRA SUE was born at Haras de La Motte bred by Mr. Guy Le Roux. Although she was high to run, she never showed herself on racetracks and was soon oriented towards polo, a discipline where she excels today to the highest level.

His rider, Pierre-Henri NGoumou, a member of the Land Rover team, is known to be a fan of Retrained Thoroughbreds. He has also retrained several in the discipline of polo, like GET BLACK, a grey Thoroughbred reformed in 2008 and also on the ground.

Thanks to the support of Laurent Benoît, founder of Broadhurst Agency, SUE BREEZE received an embroidered blanket with the colors of the association from the hands of Elizabeth Doumen, member of the steering committee of Au-Delà des Pistes and ambassador of France Galop.

This event gave us one more time, the opportunity to admire the great versatility of these amazing racehorses!