Further success for the Retrained Racehorses Day at Chantilly 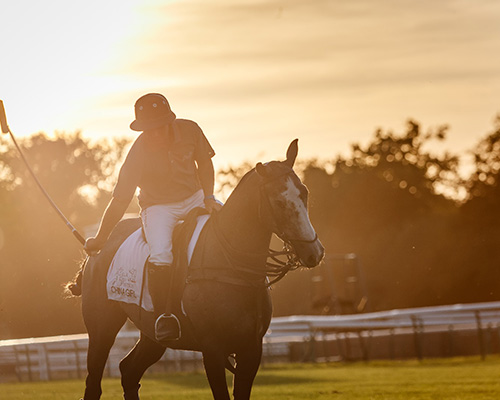 Supported by the company DYNAVENA, this day highlighted ex-racehorses that have been retrained in the disciplines of top calibre dressage, polo, and eventing. Xavier Lippens, the Director of the leading supplier of flaked feeds for horses, said, "We pay particular attention to the well-being and development of the horse, from birth to retirement from competition. The conversion of racehorses is an integral part of this curriculum and it is very important for us to support each horse in its adaptation to a new life. It is for this reason that we have decided to support the association Au-Dela des Pistes, which strives to promote the versatility of thoroughbreds and to multiply the opportunities for retraining."
ALMIYR, an Aga Khan Studs’ homebred that had his career curtailed by a tendon injury, gave the crowds a magnificent demonstration of top calibre dressage under Yves Bienaime, the creator of the Museum of the Horse in Chantilly. Now a six-year-old, the good-looking grey has spent the last 18 months retraining and wowed the public with half-passes, manege walk and bowing.
SHAHWARDI is another homebred by His Highness that has known a singular destiny. After winning at Listed level for Alain de Royer-Dupre and being placed in the Gr.2 Prix du Conseil de Paris… behind a certain CIRRUS DES AIGLES, he was sold to the Australian owner Tony Bloom and sent to Great Britain.
Following disappointing results in 2011, the then five-year-old was sent back to his original trainer in his new colours. This proved to be a success, as he won at Group 2 level in Australia and well placed in England, before retiring in 2014 at the age of 8.
Subsequently retrained for eventing by Doris Cantinol, the son of Lando showed his talents off with a show-jumping display in company with the former Richard Chotard trained seven-year-old NOBLE NIGHT, that returned to Chantilly five years after being unplaced on his second start.
The Polo demonstration also captured the crowd’s imagination thanks to several exciting accelerations and passes of the ball that had come from Chantilly Polo Club where they are playing at National level, just two years after being retired from racing.
Lastly, the much-appreciated Parade of Champions allowed numerous fans to admire once more the charity’s ambassador, CIRRUS DES AIGLES, ridden by his faithful rider Zoe Garoullaud, before Corinne Barande-Barbe’s protegy played the game of selfies.
The next Retraining of Racehorses Day will take place at Maisons-Laffitte Racecourse on Saturday, October 13.
For further information relating to the activities and actions, please contact Marine Thevenet : marine.thevenet@audeladespistes.fr