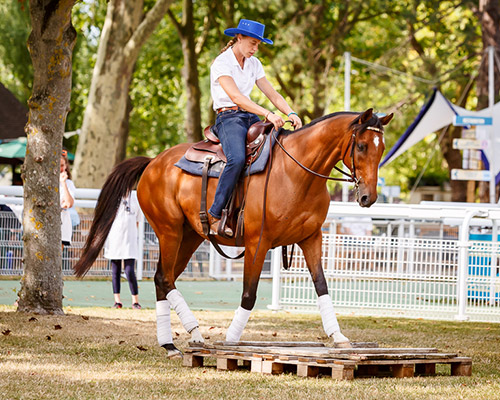 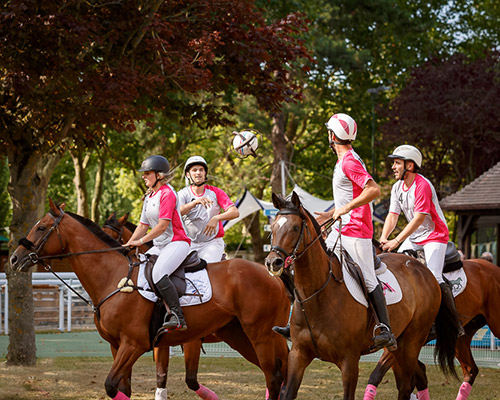 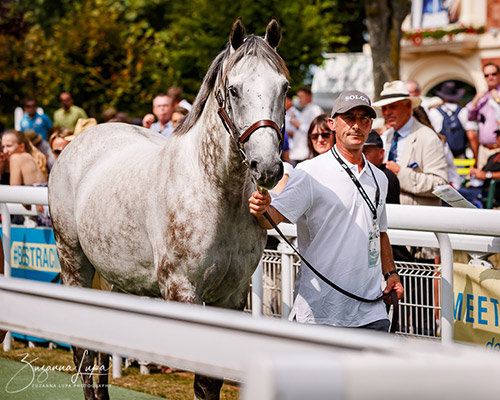 The first event of the day was the Champions’ Parade, held just before the feature Prix de la Reconversion des Chevaux des Courses.  A large crowd packed around the parade ring to see the return of the mighty SOLOW, a five-time Group 1 winner for his owner-breeders Wertheimer & Frère.  Among those visibly moved to see the handsome grey, who clearly marked those around him during his racing career, were his former trainer, Freddy Head, and his travelling head lad, Regis Barbedette, who’d accompanied the horse on his trips to Dubai and Ascot, as part of his winning sequence of ten races where he’d beaten al before him.  Having suffered a career-ending injury the seven-year-old is now enjoying retirement at his owners’ Normandy stud.
SOLOW’S return was just one of the attractions, as also parading alongside him was the ever-green and ever popular CIRRUS DES AIGLES, who is as fresh as a two-year-old, despite his long and extinguished globetrotting athletic career.  His many and loyal fans were on hand to see him show off his well-being, ridden by his long-time rider Zoe Gargoulaud, who works at Corinne Barande-Barbe’s stable, where the horse is still based.  His former trainer is an excellent supporter of the aftercare of racehorses and has harnessed the popularity of her beloved Cirrus to promote the cause.  A former star of Auteuil’s fences, REMEMBER ROSE, a multiple Grade 1 winner in his discipline, and now aged fourteen, was accompanied by his former jockey Bertrand Bourez.  The three Godolphin horses, AFRICAN STORY, PRINCE BISHOP and PAPINEAU were also present for the second year running, with the seventeen-year-old PAPINEAU as handsome and imposing as ever.  He wouldn’t have looked out of place in a showing championship.
During the afternoon, Au-Delà des Pistes volunteers accompanied members of the public on organised visits to the stables to meet their equine idols and have their photographs taken alongside them or just offer up a carrot in appreciation.
It’s not just those household names and stars of yesteryear who drew in the crowds, as the later demonstrations proved.  VISION SPECIAL was the first horse Deborah Leroy ever sat when arriving to work in a racing yard.  When his less-than-stellar racing career came to an end, his former rider seized the opportunity to rehome and retrain him.  A Deauville they performed a version of Extreme Coywboy Race with Vision Special walking through and over obstacles such as flags, bunting and pallets. It is a discipline based on trust between horse and rider, and the duo’s complicity was in evidence on Saturday, impressing a crowd used to seeing thoroughbreds showing more flighty tendencies! As commentator Jean-Baptiste André remarked “If we’d asked them jump through a ring of fire, they would have done so without blinking.”
AKHDARIANE, a fifteen-year-old mare, failed to earn a single penny in her sixteen-race career, but she is now a gentle and talented performer for her owner Chloé Neu.  The pair gave a graceful display of dressage in the parade ring, before moving to the track where they pinged over a series of showjumps up to 1m25 (4ft 1ins) in height.  Despite not making the cut as a racehorse, the chesnut mare is a great example of the adaptability of the thoroughbred and how they can find their niche in another equestrian sport.
Like last year, the Haras de Boscherville Horseball team were on hand to show how well thoroughbreds adapt to this fast-paced sport, showing off their skills in passing the ball from rider to rider, and daring displays picking up balls, which requires the rider to take both hands off the reins and reach to the ground. One of the five-strong team was BULLISH BEAR, who last raced on the 8 August at La Teste de Buch in the South West of France.
Reigning Olympic Champion in the team three-day-eventing, Astier Nicolas, one of Au-Delà des Pistes’ ambassadors, signed autographs at the stand which brought the magnificent day to a close.
Aliette Forien, Au-Delà des Pistes President, reflected on the day: “Once again, Au-Delà des Pistes has put front and centre that which holds this entire industry together, beyond sporting or commercial interests: the love of the horse. Today racing professionals, and equestrian sportsmen and women, were united by their common love for this brave and intelligent animal.  As Deborah Leroy said, “they ask only that we teach them and earn their trust, and in return they give us everything.”
It is so important that racing professionals are aware of the pleasure their horses can continue to give once their racing career has finished, whether it was a successful career or not, and also that those who practice other equestrian disciplines are aware of what this big-hearted breed can do beyond the racetrack.  On behalf of Au-Delà des Pistes, I’d like to thank France Galop who helped us organise this day, our partners Ecurie Seconde Chance and the Ligue Francaise pour la Protection du Cheval who were present with us today, and all the participating riders and the team of volunteers who make days like these such fantastic success, and an absolute joy to share and be part of.  Our racehorses have earned a chance at a second life, if we give it to them, they will pay us back one hundred-fold.”
The next Au-Delà des Pistes event will be a Champions’ Parade at Auteuil, on the occasion of the 48 H de l’Obstacle on 4th and 5th November.