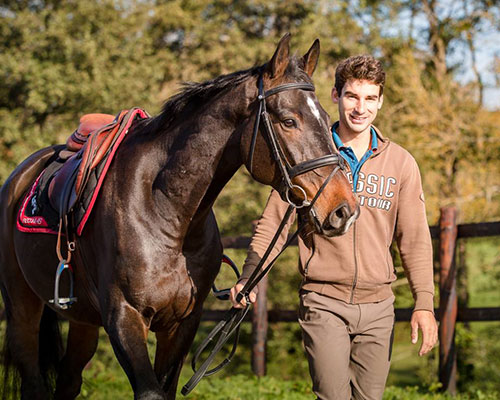 Au-Delà des Pistes, the newly formed retraining of racehorses charity, created earlier this year under the initiative of Godolphin and the Aga Khan Studs, has the pleasure of announcing three equine and five human ambassadors.

Au-Delà des Pistes, the newly formed retraining of racehorses charity, created earlier this year under the initiative of Godolphin and the Aga Khan Studs, has the pleasure of announcing three equine and five human ambassadors. Their duties will include attending Au-Delà des Pistes organised events plus supporting the charity on a regular basis. Au-Delà des Pistes promotes the retraining and the welfare of thoroughbreds for the French racing industry.

Au-Delà des Pistes has three equine ambassadors that are all retrained thoroughbreds.
Cadeau Du Roi has regularly established himself as one of the leading three day event horses in France under his international rider, Cedric Lyard. Second in the French National Championships at Pompadour in 2014, this thoroughbred is a wonderful example of the versatility and adaptability of a retrained racehorse.
Cirrus des Aigles is a welcome additional to this trio as following an outstanding race career during which « Fighting Cirrus » won 7 Group 1 races, this champion racehorse has now retired from the tracks to spend his time as a riding horse for Christophe Soumillon’s family. Paddock rest and ridden exercise are now the daily routine for this extraordinary racehorse and Cirrus Des Aigles has taken to his new life with ease.
Au-Delà Des Pistes is particularly pleased to announce Kasbah Bliss amongst their equine ambassadors. Following an international race career, where he notched up multiple group race wins on both the flat and the jumps, Kasbah Bliss has retrained successfully as a dressage horse. In his new career, Kasbah Bliss has already won several competitions under his faithful rider and retrainer Eugénie Danloux d’Harambure.

Astier Nicolas, the Olympic gold medalist in the eventing team competition and silver medalist in the individuals in this year’s Rio Olympics, this high achieving athlete has a deep seated interest in the racing world having already participated in pony races as a child. Astier Nicolas is an important ambassador for Au Delà des Pistes as one of the main objectives for this charity is to create links between the equestrian and racing worlds.
Christophe Soumillon is an internationally renowned, multiple champion French jockey. In taking up the role of ambassador, alongside his equine companion, Cirrus Des Aigles, Christophe Soumillon shows the importance he places in equine welfare both during and after their race careers.
Kamel Boudra is one of the most popular presenters for the Equidia television channel. He is the host of Equestrian Le Mag and Profession Crack as well as the commentator of all the major equestrian events covered by the channel. Furthermore he oversees many documentaries produced by Equidia about the biggest flat, jumps and trotting races. Kamel Boudra is a real horseman : a rider and breeder of sport horses, he is fascinated by all the equine disciplines and he recently obtained his owner’s racing colours. Au Delà Des Pistes is privileged to have the support of such a fervent horse lover and Kamel will undoubtedly bring our charity closer to one of our key goals of promoting ex-racehorses to the equestrian world.
Nicolas Touzaint, Olympic eventing champion, European champion and the young horse World champion, Nicolas has accepted with great enthusiasm to become one of the ambassadors for this young charity. Nicolas is also fascinated by the racing world. An amateur jockey, breeder, owner and more recently a permit holder to train thoroughbreds, Nicolas shows a real passion for racehorses and he regularly retrains thoroughbreds for equestrian competitions.
Pierre-Henri N’Goumou is one of the stars of the French polo scene and he has won numerous competitions including the Open de Paris, the Open de France and the Coupe d’Argent at Deauville. He is the owner and manager of the Grassfields polo team and of the Haras du Houlley stud where he oversees several different activities notably the purchasing, training, reselling, hiring and riding of thoroughbreds. Pierre-Henri is therefore a very important personality in the world of retraining racehorses.
As a reminder to a previous announce, Au-Delà Des Pistes organize their first ever stallion nomination auction at ARQANA, Deauville on Friday 2nd December. The funds are being raised to promote thoroughbred aftercare and the retraining of retired racehorses in France.
Please contact Marine Thevenet for more information: audeladespistes@gmail.com